Daniel García Andújar works under the banner of Technologies To The People(TTTP), exploring virtuality, authenticity, copyright, sponsorship, media and power as new technology and the access to it spreads across the globe.

Daniel García Andújar (Almoradí, 1966) began his artistic activity in the late eighties, working mainly in the field of video, in projects of intervention in public spheres on the topics of racism and xenophoby, as well as the misuse of technology in sureveillance systems. After familiarising himself with computer resources and their interactive possibilities, since the year 1996 he has been developing the project entitled Technologies To The People (TTTP), which has led to further developments, both in the net and with physical media (exhibitions, installations, CD-ROMs). TTTP is housed in irational.org, a web site created by the "anartivist" Heath Bunting and gathered in selections of net art such as Some of my Favourite Websites are Art and Beyond Interface. Other physical presentations of the aforementioned project have taken place in the framework oshows such as Un-Frieden/Discord: Sabotage of Realities (Hamburg), Desde la imagen (Valencia), Scattered Affinities (New York/Madrid) or Reservate der Sehnsucht (Dortmund).

Instead of surrendering to the fetish-like quality of new technologies, TTTP focuses its attention on the battlegrounds that are emerging. Instead of complete rejection, TTTP has a pragmatic functionality when considering what could be in store, and our scope for action in a society immersed in rapid fundamental change.

It aims to question who has real access to technology and will there be a divide between ‘info-rich’ people and ‘info-poor’ people? How can we avoid this division and will it affect society in the future? What can we do to include more “classes of people” in the new information global infrastructure?

Promoting, using and developing resources, as in the case of Free Software applications, will give a wide range of communities a greater degree of independence and self-control; on their own terms rather than through tainted corporate or government controlled models.

The net allows the concentration of knowledge and information to be broken down, and contributes new dimensions of globality and virtuality. It is an instantaneous medium at a relatively low cost that, albeit only potentially, fans hope for the democratization of culture.

The friction in the work of TTTP lies in the apparent freedom of the Internet, the knowledge it holds, and who actually owns or distributes this knowledge as a means of developing power. How this battle is fought out has serious repercussions regarding the growing problem of a digital, techno-illiterate underclass. 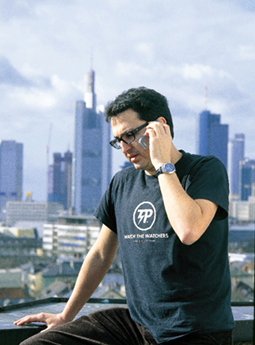