Muntadas studied at the Technical School for Industrial Engineers in Barcelona and the Pratt Graphic Center in New York, where he has lived since 1971. He has taught and directed seminars at diverse institutions throughout Europe and the United States, including the National School of Fine Arts in Paris, the Fine Arts Schools in Bordeaux and Grenoble, the University of California in San Diego, the San Francisco Art Institute, the Cooper Union in New York, the University of Sâo Paulo, and the University of Buenos Aires (UBA). He has also been welcomed as a resident artist and consulting advisor by various research and education centres including the Visual Studies Workshop in Rochester (USA), the Banff Center (Canada), Arteleku (San Sebastian), The National Studio for Contemporary Arts Le Fresnoy (Lille Metropol), and the University of Western Sydney. He is currently Visiting Professor at the Visual Arts Program in the School of Architecture at the M.I.T. in Cambridge (MA) and the Instituto Universitario de Arquitectura del Veneto in Venice.

He has received several prizes and grants, including those of the Solomon R. Guggenheim Foundation, the Rockefeller Foundation, the National Endowment for the Arts, the New York State Council on the Arts, Arts Electronica in Linz (Austria), Laser d'Or in Locarno (Switzerland) and the Premio Nacional de Artes Plásticas awarded by the Catalan Government. Recently he was also awarded the Premio Nacional de Artes Plásticas 2005 granted by the Spanish Ministry of Culture.

His work has been exhibited throughout the world, in events such as the 1976 Venice Biennial; Documenta Kassel (VI and X Edition); the Whitney Museum Biennial; and the Sao Paulo, Lyon, Taipei, Gwangju and Habana biennales. He has exhibited, among others, at the Museum of Modern Art in New York, Le Musee Contemporain de Montreal, Berkeley Art Museum in California, Museo Nacional Centro de Arte Reina Sofía in Madrid and the MACBA in Barcelona. He participated in the 51st edition of the Venice Biennale (2005), where he transformed the Spanish Pavilion into the On Translation Pavilion. 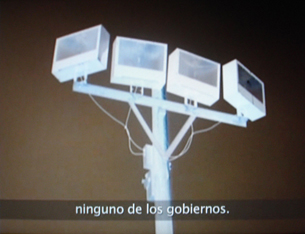 Antoni Muntadas (Barcelona 1942) addresses through his works social, political and communications issues, the relationship between public and private space within social frameworks, and investigations of channels of information and the ways they may be used to censor central information or promulgate ideas. He works on projects in different media such as photography, video, publications, Internet and multi-media installations.

Since 1995, Muntadas has grouped together a set of works and projects titled On Translation. Their content, dimensions and materials are highly diverse, and they all focus on the author’s personal experience and artistic activity in numerous countries over a period of thirty years. By grouping such works together under this epigraph, Muntadas places them within a body of experience and concrete concerns regarding communication, the culture of our times and the role of the artist and art in contemporary society.