Enrique Radigales (Saragossa, Spain, 1970) studied arts at the Escola Massana in Barcelona, where he graduated with honours in Painting in 1994. During his early years of career he devoted himself to this speciality exploring different aesthetic and conceptual lines. In 1995, with the advent of Internet and new digital media that opened a new investigation field, he started creating simple computer animations. In the recent past he has dedicated himself to his ongoing project, idealword.org, in which he blurs the boundaries between net-art and its physical outputs. Radigales keeps exploring new forms of bringing digital art to life in our physical world. He was awarded the Bronze Award at the Canon Digital Creators Contest in 2003 and the second net-art award at Ingenio 400 in 2005. He was included in the Leandre Cristòfol Biennale of Contemporary Art (Lleida, 2006) and in ISEA 2004. He currently lives and works in Madrid. 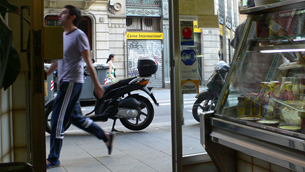