He organises and leads seminars, workshops and conferences on film, video, photography, television and advertising in academic and cultural centres (1976-82). He is the promoter and organiser (1983-1986) of the “Muestra de Videos Realizados en Barcelona en torno al Arte, La Música, y la Realidad” (later known as “Mostra de Videocreació de Catalunya”). Organiser/curator of, among others, the “Muestra de Videos Brasileños” (1985) and the “Muestra de Videos Italianos” (1986). He organises and directs the “Primer Concurso Mundial de Cámara-a-mano” and the exhibition “Del cine-ojo al video-yo” (La Caixa, 1987). He premieres the theatre and multimedia spectacle “El ring” in the Mercat de les Flors, Barcelona. He presents “Boxiana” in the art gallery “La Pedrera” (Barcelona, 1988), an exhibition about boxing featuring videos, installations and paintings. He presents in the nightclub Apolo (Barcelona, 1990) “Macedonia de frutas Cirsa”, comprising “Operación fimosis” (performance), and “Macedonia de frutas Cirsa” (a concert with the sound of slot machines). He develops and patents the technical mechanism FishCam (an autonomous recording system).

As a freelance director he has worked on assignments of institutional, industrial, educational and advertising character (1981-1995). As an independent author-producer his career begins in 1978 with “Bellvitge, Bellvitge”. Since then he has worked on more than 500 monochannel productions in video and film (16mm and 35mm). He has participated in most Spanish and international video exhibitions and festivals. He has received over thirty prizes and has been selected for the most important festivals. He is part of the first generation of Spanish videomakers.
As a columnist he has written for “Triunfo”, “Casablanca”, “Cuadernos de Pedagogía”, “Ozono”, “Video-Cine20”, “La fotografía”, “El lápiz”, etc. Presently, he is the director of the Escuela de Video-Cine-Tv, 3D & Multimedia, IDEP (Barcelona), a post he has held since 1981. He combines this activity with the independent creation-production of his own work on video, film and interactive media (net art, CD-Rom, DVD). 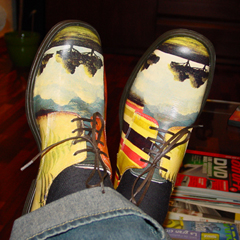 Iconoclast by default and borderline (on the margins) on his own will. He does not partake in any collective, tendency, style or established movement. His compromise is formulated and takes shape in his work, in which he combines genres and languages with the objective of blurring the boundaries, contaminating identities on one and the other side, and above all, of questioning all certainties.