Kikol Grau has been working on video for about 16 years. Together with a friend he presented a programm on TV Clot (Barcelona TV) without any technical knowledge or studies, just with the idea of making a television programm. The programm Por la Kara TV allowed him to experience everything he wanted and could learn. PKP was a savage magazine without limits of any kind which had an impact on many of his productions, such as the Gabinete de Crisis program (a TV show you will not see on TV) performed with Arturo Bastón and Felix Arturo Perez-Hita.

Kikol has always been close to two themes in his productions, comics and music. About comics he has made series for television and about music, he is doing now reports for the TVE2 metropolis program on bands and music groups from different areas in Spain.

Other visual experiments are Jason Total Massacre where he inculdes all the deaths followed, one after the other, from the eleven movies of Friday the 13th. Docutrola how to become a television pirate , explains how to hack TV to view the pay channels for free and K-fre! From Pluton with Love is kind of short style Godzilla film.

Barriotonia an installation of four screens for the CCCB where the characters of four floors (screens) interact with each other. And last but not least, visuals about destruction and experimentation can be found in Destroy Technology Apocalipsis 2000. 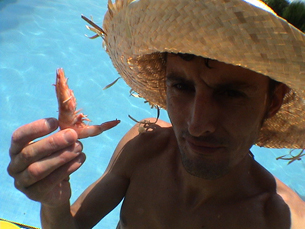