Miguel  Angel  Delgado holds a degree in Audiovisual Communication Studies from the Universidad Complutense de Madrid. He continued his training with a fellowship in Paris where he worked with the artist Alberto Garcia-Alix. As a partner of the Studio Joaquin Gallego (design and development of audiovisual projects), he has taken in charge the artistic direction of audiovisual department of the Circulo de Bellas Artes in Madrid, working in different projects such as art  director of  the documentary 'Bonifacio,  la cicatriz interior'(Bonifacio,  Internal  Scar),  'Don  Quijote  en imágenes'(Don Quixote in Pictures) X reading of Don Quixote, and the audiovisual design for the exhibition spaces of Basilio Martin Patino´s 'Espejos en la niebla'(Mirrors in the Fog). Exhibitions of  Alberto Garcia-Alix,  Chuck Close,  Eugene Smith, Contemporary African Art and Artists of Atzlán in art spaces as: Fundación La Caixa, Museo Nacional Centro de Arte Reina Sofía,  Comunidad de Madrid and La Casa Encendida.

As a filmmaker,  he has collaborated with artist  Alberto Garcia-Alix as cinematographer of the film De donde no se vuelve (From Where There is not Return) premiered at the Reina Sofia National Museum in Madrid. He has taken part of the program Demon, Le Monde à l'Envers, Embassy of France in Spain, in the project Ciudades en abismo, in collaboration with writer Antonin Potoski. Awarded a script development by the Regional Government of Castilla La Mancha with a project of French-Spanish co-production. His work has been seen in 143 Delicias, at the Centro de Arte Dos de Mayo, in the Amalgama series of screenings and is part of the catalog of video art distributor Hamaca. He currently heads the project Arquitectura y resistencia (http://www.arquitecturayresistencia.com) in collaboration with artist Nicolas Combarro,  a proposal  open to the participation of other artists, presented at the Cultural Center of Spain in Mexico and he is artist in residence at the Seoul Art Space Geumcheon in Korea. Among the workshops and seminars in which he participated, stands out the one taught by Pedro Costa in Madrid. 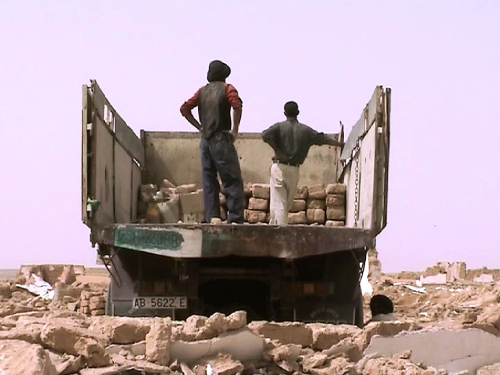 The documentary work of Miguel Ángel Delgado, which comprises Videoemplazamientos and El  tiempo animal,  takes the subject  of  time in its different manifestations as its central axis, based on regular situations, apparently unimportant facts, realities where the accessory takes the first range in equal conditions.

This way, the videos that conform the different series are the result of the relation with an immediate reality that reveals, through natural representations, the temporary character of the image. Far from the asepsis of the situations, these works introduce the spectator in a tissue where time frees from its conventionality, setting forth a relationship between beholder and the image itself.

In the series Videoemplazamientos (Video-locations) the spectator is confronted with situations where the strength of the work concentrates in the recovery and accumulation of building materials to be recycled in new constructions. The image acquires, thanks the to the dynamics of destruction, recovery and classification, a stratified nature that puts us in relation to different temporalities. The myth of Sisyphus, forced to roll his rock to the top of a mountain for eternity, resonates in the piece Chicos del 27 (Kids from the 27); two boys, living in a Sahrawi refugee camp in the plain desert, are condemned to a permanent struggle in the aftermath of floods in Sahara. The videos of the series 'El  tiempo animal'(Animal  Time) cover situations in which the attitude of domestic animals questions the boundaries between conventional time and a temporal free fluctuation.