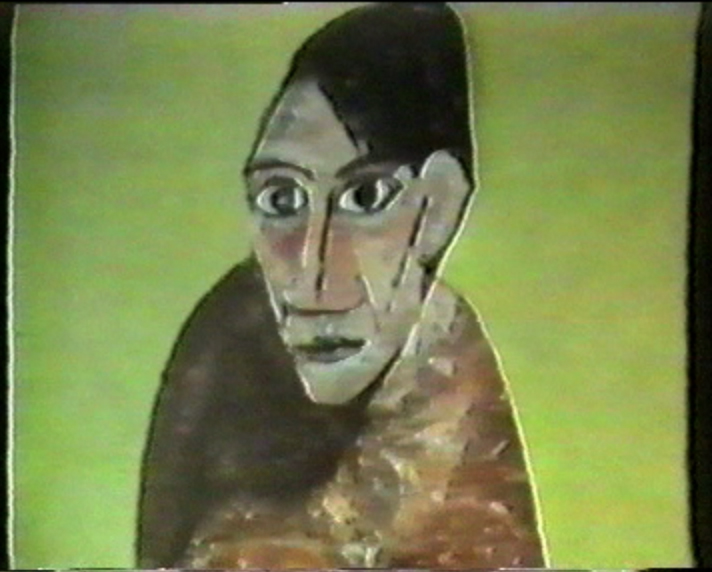 “A good critic is she who relates the adventures of her own soul among masterpieces.” (Anatole France)

Picasso por Picabia is a dadaist rebuff on video by the collective Agustín Parejo School. In it, the history of art is gone over in the head of Picasso as looked at from Francis Picabia’s cacodilated eye. A visual metatext as political statement is put together with disordered clips of historical images. This is a sloppy video, full of breaks and brutal drops that leave the spectator in a state of arbitrary paranoid uncertainty.

The head of one of Picasso’s self-portraits is cut out and obsessively superimposed on art works and emblematic photographs of different, seemingly unrelated, revolutions. It takes control of history. Among the pieces shown, we can discern the frescoes of Micene, Crete, Altamira and Egypt, paintings by Velázquez, Greco, Klimt, Matisse, Goya, Duchamp, Munch, and let’s not forget, the Discobolos. These are mixed with photographic images of dictatorships, totalitarian régimes, and the Vietnam war. And yet, after the long enumeration, we realise that its purpose is no other than to destabilise, to use the different referents that have been gathered rather accidentally. The images have been chosen unsystematically, just like the pictures that we used to find in our highschool art books (all the “master” pieces of a period’s culture). Picasso por Picabia is a punk joke in which the collective Agustín Parejo School parodies the relationship between the politically engaged artist and politics, going over all the antecedents of artivism (artistic activism which would become trendy the following decade).

UHP’s soundtrack, in the style of Suicide (psychopathic rhythm box and recital), comprises an obsessive libertarian poetic discourse in Italian, through which we can discern with difficulty expressions such as: freedom, seems like a mosquito, seems like a statue, hand to hand, like a vigorous guard, Elvis is dead, you dance like a feather, republican union, the spirit of revolt in an avant-garde poetry piece, cacodilate,...

Agustín Parejo School deliriously dramatizes a sound and video emulation of Picabia’s painting L’oeil cacodylate (the cacodilated eye), which was itself a tribute to the medical product that cured his eye. Different sentences, names, speculations, dates, etc. are handwritten on the painting, as if the latter was an arm or leg in a cast, or a bar’s toilet door, where each visitor, protected by anonymity and the public yet particular view of the venue, has written the different catch phrases and rebuffs that have come to her mind. This is the video version of the original 1921 piece, which was criticised for being like “the wall of a public toilet”. A collective piece and subproduct of everyday art.