BA in Fine Arts from the Universidad de Barcelona. Further education at the E.N.S.B.A. Paris in 1991. He participated in the London Biennale 2000 and took part in the residency programme of the atelierstipendium Stadt Moenchendladbach in 2002.

Others… Workshop director of Demagogie in Les Laboratoires, Paris 2005. Speaker at the IKT Congress in 2004. Co-curator with Jorge Luis Marzo of Vídeos d’Ocasió at Fundació Antoni Tapies in 2003. At present he is responsible for the activities at the Centre d’Art Santa Monica. 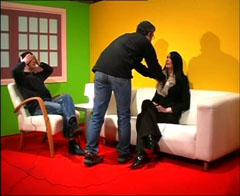 Nam Jum Paik has told the story of how at the time of Fluxus he was asked about his reason for not making boring videos like the rest of the video artists. Obviously, he clarified, density and boredom must not be confused, it not constituting a positive value the fact that video bored the audience. What I find most suprising about this anecdote is that Paik’s work was considered entertaining. And that he did not realise the true value of the administration of boredom in art.

It is not completely true that light art be the opposite of dense art, but rather there is art that by means of boredom looks to effect a kind of selection of the public, just like a bar can raise the price of the drinks in order to prevent the entrance of certain groups of people, and the regulars pay the high prices happily precisely because of this, as they won’t have to share their drinking with certain people. In a similar way, we seem to have probles accepting ourselves being entertained by art.