David Domingo (Valencia, 1973), also known as Davidson or Stanley Sunday, began his career filming and editing in VHS with a Panasonic camera and video player. These were appropriation re-montages or short stories filmed at home, featuring his sister Alba Domingo (also known as Alba Lavada, Vomitoni or Albon’s) and his grandmother Josefa Fernández. After the death of the latter, he started working with Super-8 and filmed LA MANSION ACELERADA, a neogay epic inspired by the myth of turning the house upside down in the parents’ absence, as done by Joel Goodsen’s character in RISKY BUSINESS. He then filmed EL MONSTRUO ME COME, a delirium of love for Manolo Dos. After moving to Castellón, he started working in miniDV and filmed MONGOLOIDE. In this beautiful Mediterranean town he surrounded himself with his regular actors, such as Mimi Tian (previously known as Bea Pawner), Salvatore Vidal, Manolo Dos, Juan Dos, Juan Carlos Cañadas, Ana Belén and the singers Carlos Bagán and María Padilla. He then went on to film with them his “films of the room at the back”, trying to combine in them fantasy, work life, fiction, stupidity, health and ecstasy. He has worked beyond the confines of his house on very few occasions. In 2000, by invitation of Consonni, he locked himself up in a hotel room in Bilbao, with hundreds of VHS tapes with which he produced a set of re-montages titled CHICAS DE CINE, which were broadcast daily on Canal Bizkaia. 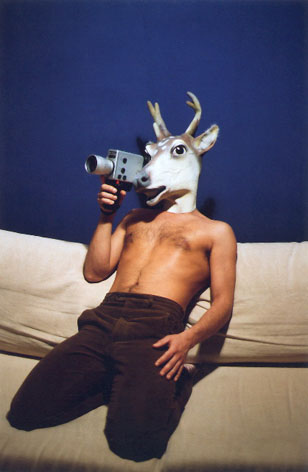