Having started working in painting at the end of the 70s, Xavier Manubens geared towards installation and performance in the 80s. He was especially interested in those elements that related to the spacial and the architectonic, incorporating an ironic rereading of mass culture’s iconography. He was a member of the multimedia collective “Zum Zum” and founded the group “Espais d’Art Contemporani”. His artistic productions, both his own and his collaborations, have been exhibited in art centres, museums, galleries and other public spaces in Catalunya, Spain, Germany and France. In 1991 he started collaborating with the videomaker Maite Ninou. He is a member of the collective “Turisme Tactic” (2001), which works on projects of intervention in the public space.

Maite Ninou is a videomaker since 1984 and teaches at the Facultad de Bellas Artes of the Universidad de Barcelona since 1996. She makes videos and video-installations, such as “A 12.000Kº” (1988), “Una” (1991) and “Non, non, no” (1993), the three works of hers with the most prizes and awards. She has produced numerous projects exploring the video format from the perspective of a multidisciplinary artistic practice. She has participated in various collective projects, such as the video magazine “Corriente Alterna” (1986-88), “Aparadors. Col.lectiu d’Espais dd’Art Contemporani” (1994-7), and “Encuentros de Video de Pamplona 1996”, “Encuentros de Video y Altermedia de Pamplona 1998” as part of the organising team. She is a founding member of the collective “Turisme Tactic” (2001).

Xavier Manubens and Maite Ninou join their artistic trajectories in 1991 producing together works that explore the sometimes paradoxical relation between the video image, space and cultural memory. Their videos and video-installations also search for the limits of formats and artistic codes. Pieces such as “Potser sí que tots som iguals” (1994), the project “Humans” (1995-1996), “Super-vivents” (1997), and “Hyperespai” (2007) have been programmed and screened in various exhibitions and festivals, like Señales de Video, an itinerant exhibition in Spain and South America (1995-1997); Artevision. A history of media art in Spain (2000, cd-rom); Mostra d’Arts Electroniques. X Mostra de Video de Creació de Catalunya (1998), and i Flux Festival (2007) among others. As Turisme Tactic, Manubens and Ninou have produced between the years 2001 and 2007 the permanent installation Vosté esta aquí a l’estación de metro de Can Cuias (Barcelona); the performance through the city of Barcelona La Ruta de l’Anarquisme, and La Ruta de la Infamia, an interactive internet project. Both artists continue to work together whilst at the same time developing their own individual projects. 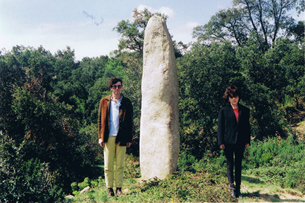