Marisa Maza is a visual artist with a long international trajectory. She works in video and photography and has a MA in Fine Arts from the Facultad de Bellas Artes de la Universidad Complutense in Madrid (1988). She completed a post-graduate course in Fine Arts and Mass Media at the Hochschule der Künste in Berlin (1999).
Prior to being a faculty member at Florida University as a visiting artist (2005-2007), Maza taught and worked at the Hochschule der Künste in Berlin, where she was also selected for a PhD programme with professor Katharina Sieverding as supervisor.

Maza has received numerous prices and grants, such as the prize from the Karl Hofer Society (2005), the grant for artistic research from the German Academic Exchange Service (DAAD-NaFöG) which is given in South Africa, Tanzania and New York.

From the early 1990s she has been questioning the concept of identity and identitary politics, as well as media, cultural, social and political representations. Her work has focused on the human body and on different typologies of urban landscapes, both real and fictional or simulated, which are then thematised as (metaphoric) systems of inscription of socio-political conditions.

More generally, the specific use that Maza makes of the video-installation format and of photography, involves a critical reflection on the limits of the formats of media representation, on relevant forms of production of images in the history of art, such as painting, as well as on the production, distribution and reception of media images.
Fragments of a text by Ulrike Kremeier 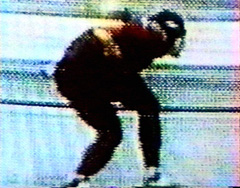 The main concern of my artistic practice since the early 1990s has been to propose questions around different concepts of identity. My production approaches political identity in its forms of media representation, as well as the cultural and social identity. By means of “human bodies” or their representations, different topologies of the real are represented, fictions and/or landscapes, simulated landscapes as, metaphorically, a system of inscription of social conditions (gender, technological, anthropological).