Since 1988 Benlloch works in the cultural production company BNV producciones.
He is member of the contents team of UNIA arteypensamiento. He has coordinated the projects Reunión 03, Ceci n’est pas un congrés (2003) and Rutas de la Potencia. Por la América de los contrapoderes (2005), a militant research project about social movements in Latin America, by the Argentine collective Situaciones.
From 1984 to 2003 he partakes in the management and production of the space PLANTA BAJA (Granada).
From 1985 to 1988 he works in the Culture Sector of the Diputación of Granada.
In the late 1970s he was part of the foundation of the gay rights movement in Spain.
Since the early 1970s he has participated in various political and social movements.
Starting in 1992, when he took part in a performance by James Lee Byars, he has been doing performances like the ones described below. 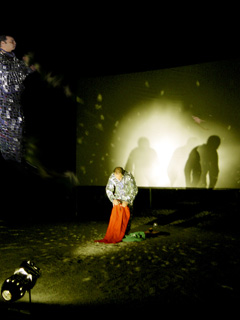 Benlloch usually develops his performances specifically for the contexts in which he is invited to participate. His performances interfere with the situations for which they are required, they are punctual acts from which Benlloch develops an interrelationship with the specific environment. His performances create discourses about the construction of identity by means of the use of sartorial elements, clothes that belong to the domain of his individuality and working clothes that point to collective spaces of production. These elements act as discourse building prostheses. The ritual conception of the process of his performances maps out a transcendent territory from which different symbols emerge that then produce knowledge in their relation to the spectator. The belief that repetition is a constitutive part of ritual conceives of identity as a cultural construction, and thus deconstructible and retualizable, in permanent movement and reflection. Gender construction, the construction of spaces other and I, light as blinding light, the construction of subjectivity in the collective geographies are in his performances, where music and dance precede the voice, mobile and traceable elements.