Video-Nou was founded as a collective at the beginning of 1977. The idea for its creation came out of the Jornadas de Vídeo, organised by the CAIC (Buenos Aires) at the Fundación Joan Miró in Barcelona. The collective’s members, mostly ex-students of the CIPLA course of Barcelona’s Theatre Institute, had different backgrounds: journalism, sociology, pedagogy, photography, architecture, art and design - later, new members joined with backgrounds in urbanism, antipsychiatry and theatre arts. The collective explored the different fields of application of video: the social, the artistic, the documentary, the educational and the professional. Video-Nou’s activity gradually focused on the practice of a horizontal, bidirectional and participative kind of communication, within what was then known as “sociocultural animation”: in this case, the production of videos elaborated with the direct participation of the interested subjects, videos that were then immediately distributed and broadcast in their specific contexts - what the collective called “video intervention”.

Early in 1979 Video-Nou became the managing team of Servei de Vídeo Comunitari - created as a public service -, and in March 1979 organised the first Community Video Days at the Colegio de Arquitectos de Catalunya. In July 1979 the collective started its collaboration with the Theatre Institute, first as a non-for-profit organisation and later as a cooperative. This lasted until 1983. The main objective of the Servei de Vídeo Comunitari was to distribute and promote the use of video as a means of communication and social, cultural, educational and informative dynamisation of community life. Over three hundred people were trained, and information and distribution contacts were kept with the international net of centres dedicated to decentralised and horizontal forms of communication. The project also contributed in a critical manner to the expansion of video and local television.

During the six years between 1977 and 1983 the collective participated in the historical events that took place in Cataluña and Spain: the political “transition”, the urban social movements and struggles, and the cultural and technological shifts.

The archive Video-Nou / Servei de Video Comunitari has been recovered (with part of it already restored) thanks to the Museu d’Art Contemporani de Barcelona (MACBA) and the exhibition Desacuerdos (2005). 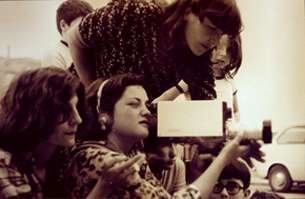