She lives and works in Barcelona, her hometown, in which she combines her video creations with teaching at UAB and editing jobs and assistant director for Eulàlia Valldosera, among other filmmakers.

After graduating in Fine Arts, various scholarships led her to live and work in Mexico, where she produced her first works that have been shown in MNCARS, OVNI, LOOP, CCCB and the Spanish cinema Biennale of Annecy.

Her production as video artist comes close to the documentary genre, that is why she holds an MA in Creative Documentary at the UAB, which produces together with Localia TV the documentary  "Lo que tu dices que soy."

This production deals with a recurring theme in her work: work and its paradoxes, and has been shown at the Filmoteca of Spain, Caixaforum, CCCB, LOOP and at different film festivals and documentary shows. 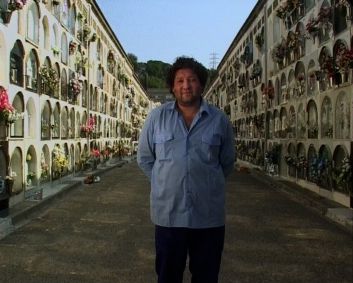 In a time of fluctuating identities, hybrid and temporary, the work of Virginia Garcia del Pino asks for the social brands that we (d) limit beyond personal choices. Her films delve into the complex world of work, with its paradoxes, their interdependencies and specular effects. The work identity is presented as social brand that limits individual expression, but also strengthens it. Trapped and driven by their own frame of reference, the interviewed in the videos of Virginia Garcia del Pino find the ideal context to confess their true to the filmmaker. The (d) familiarity and accuracy of the frame generate an antirealistic and denaturated process which causes an alienating effect, placing the viewer with the challenge of understanding their own work identity.