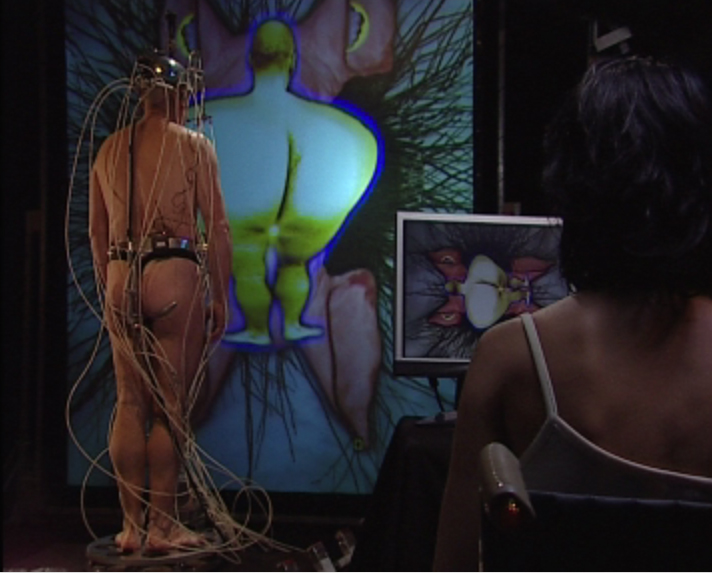 Epizoo documents the interactive mecatronic performance by the same title. It synthesises the performance’s development and at the same time displays, by means of a syncopated montage of shots of various enactments filmed between 1994 and 1997, the different elements that intervene in the performance. Firstly we have the artist himself, Marcel·li Antúnez Roca, wearing an “exoskeleton” which alters the appearance of various parts of his body, under the control of the spectators/participants, who model and abuse this biomechanised body as if it was an insensitive robot or a cybernetic creature. For this they use a computer interface, and play with the artist’s body as if in a videogame. Other elements in the performance include the projected images on a vertical screen in the background (digital animations and closed circuit recordings), sound atmospheres - which also flow interactively - and the fire which emerges at the climax of the performance.

The piece’s description states the following: “The robotic orthopedy is attached to the body by means of two metal moulds, a belt and a helmet, where the pneumatic devices are affixed. These can move Marcel•li’s nose, buttocks, breasts, mouth and ears, while he stands on a rotating circular platform. The pneumatic devices are connected to a computer regulated system of electrovalves and relays. All of the eleven interactive settings include different animated computer graphics recreating the artist’s figure and indicating the position and movement of the devices. With the mouse the user can thus control the light, the images, the sound and the artist’s body. [...] This is an early example of the application of computer technology relating to the human body. This is probably the first performance that has allowed for the telematic control by the spectator of the performance scene, including the performer’s body.”

As in other works by Antúnez, this piece is the result of a team effort that includes the contributions of Sergi Jorda in music and computer design, Roland Olbeter in the sculptural-mechanics, Paco Corachán as co-autor of the animated sequences, and Ramón Rey in light design.