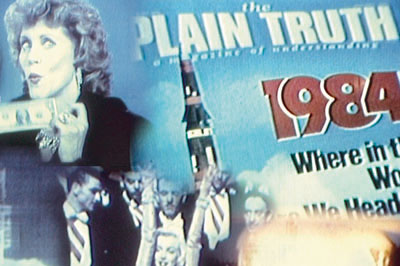 Balcells made this piece for a screening of 3 min. long films, organised by the Collective for Living Cinema in 1983 in New York.

As in some of her previous work, in For/Against Balcells uses found footage to put together a critique of the mass media and, more specifically, of the use and circulation of violent images. The film, co-authored by Peter van Riper, is structured around the distance that it establishes between its visual dimension and the sound track. Whilst the visual part of the film comprises a rapid flux of intertwining images coming from the mass media (television, advertising, etc.) and focusing on contemporary armed conflicts and the violence inherent in any message, the soundtrack is composed of a succession of quotes of various origins which praise the power of art, of creativity, of reflection, etc.

This piece renders visible and confirms the actual difference between that which the average citizen is subjected to on a daily basis: the images; and the texts, which are only accessible to those who read them, and thereby allow them to open up the possibility of other realities and thoughts. For/Against emphasises the mimetic capacity created by images in most mass media, as well as the capacity for reflection that on the other hand a text instances. Only a thoughtful attitude towards images can lead to a critical reading of them.