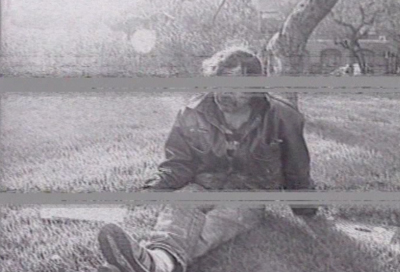 Protected by the sky and Don Simón wine, Paquito doesn't need anything. From his spot he can observe the whole neighborhood. Interviewed by the author, he discusses his private life before a camera that registers the conversation with difficulty. A whole repertoire of video problems (rewinding, interferences, jumps, negatives, colorization) take over the report, distorting both image and sound. The medium controls the answers, but nevertheless Paquito can overcome it all.

Rereading the format of social documentary, Xavier Hurtado interviews Paquito, an indigent man from Malaga that lives in Barcelona's Plaza Castilla. Paquito explains, both to the camera and himself, the reasons behind his lifestyle and how he considers himself to be lucky. A person whose roof is the cloudy sky watches over both his urban space as well as the people who pass through it. He is a man who feels completely integrated into his park and is also the memory of everything that happens in the area.

An uneven dialogue because the one who has the camera has the power, with the ability to cut, edit, and manipulate however they desire. In this way, Xavier Hurtado disrupts reporting by removing the format from its natural context of testimonial documentary through the introduction of the medium's own noises: the tape's movement, ghost fragments, image alterations (saturation, negative, slowing down, etc.). A whole menu of effects that destroy the image and sound, making the editor's presence obvious: a person who for different reasons (content, time and space onscreen, esthetics, etc.) censures the testimony, manipulates reality, and adapts the truth to the television medium. A standard program that ends up as a manifesto on the external interferences that influence electronic representation of reality.