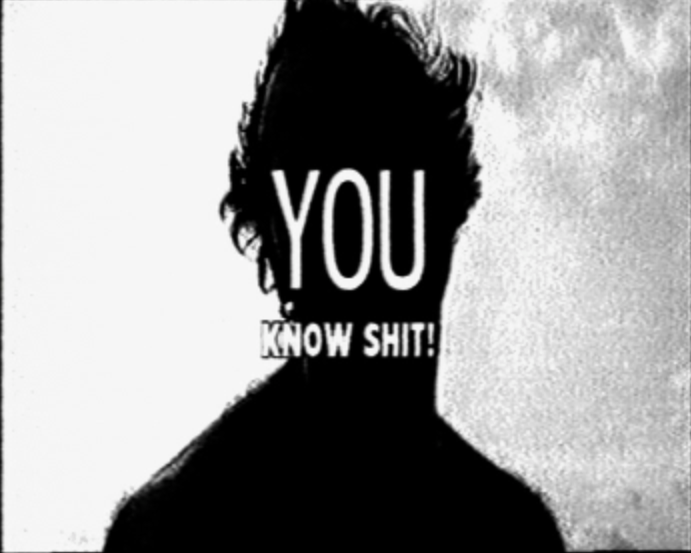 Joan Leandre evinces media terrorism. MAP Zero is the video with the largest number of insults per second in the whole of the Spanish video art scene. Following BRCW (Broadcasting World) production techniques of the late 90s, Leandre scraps B movies in order to create a personal Apocalypse, a catastrophe film in which danger lies precisely in the progress of violence.

At the start of MAP Zero we are on the roof of a building. The point of view is that of a drunkard, who is spitting out an anti-system monologue. He ends up seeing the light (of a bomb), communication fails and chaos takes hold. A virus transmitted through the waves creates all sorts of turmoil. Anarchy, fire and violence take over, everything else fails, there is no salvation...

MAP Zero stretches the possibilities of American disaster movies. It is the result of different television clips assembled together. The soundtrack comprises a constant recital of insults which are pasted together with texts from television corporations. The visual reply consists of an image that is constantly altered. Various phrases are written over the image like subliminal orders in different languages. By using video scratch (a technique used in video that combines different visual and sound fragments from appropriated film material) for a fiction piece, Leandre suggests new ways of understanding aggressivity. The origin of the fragments, which have been uniformed in black and white, is dissolved by the violence of the assemblage, which constructs a brusque narrative full of unexpected turns, media noises and elusive transcriptions. The spectator is confronted by an aggressive avalanche of messages, referents, maledictions, revolts, irreverence and drugged meditations. She is put in a state of constant alert and agitation.

This video is part of the series MAP (Mega Assemble Project) which began in 1994 and in which Leandre deals with the issue of how media powers, in the form of a mega-corporation, threaten humanity, appropriating and adapting its aesthetics, logos, symbols and warnings. After this long video series, he produced Fundación Zero and Serial Monuments, which concluded in 1996 with the interactive CD Rom Mega Assemble Project MSN - Adult Playground 1.0. These works are linked, formally as well as ideologically, with the different projects that came out of the collective 12ª visual and out of the Barcelona festival Ovni, which included the collaboration of Toni Serra, Nuria Canal, José Manuel Palmeiro and Xavier Hurtado, among others. These projects presented critical parodies of the mechanisms of power of television companies, of show business, of propaganda agencies and of the new corporate structure of computer businesses.