Huelva, 1960. BA in Fine Arts from Valencia’s Polytechnic in 1987. Presently living in Granada. From 1993, year in which her artistic activity began, she has participated in various solo exhibitions, such as Indiferencia es diferencia (1994), La última realidad (1995), Los ilusionistas and Brûlant d´amour sans object (2001), Cuando se oyen las moscas volar (2003)…, as well as group shows such as 100% (1994), Almadraba (1998), Iluminaciones (1999), Bordes Inasibles (2000), El bello género, convulsiones and permanencias actuales (2002), Carrera de fondo (2005), among others. In 2006 she participated, together with Javier Codesal and Alex Francés, in the exhibition Intervalo (Contemporary art and flamenco), with her project De lo posible a lo imposible. 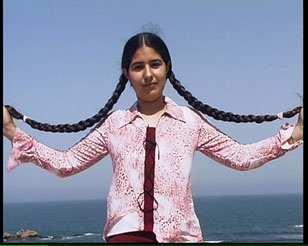 Carmen F. Sigler was born in Ayamonte (Huelva) and is one of the most renowned artists in Andalucía. Immersed in the latest tendencies of contemporary art, she has been able to develop her own path, along which she has managed to achieve a difficult goal: that the discoursive and narrative level, as well as the aesthetic and poetic tone, of her works be always at the same level of intensity and strength. A path that is leaving a firm, and very personal, trace, that has been taking shape since the early 1990s and has been gradually getting deeper up until the present moment.

Sigler is an artist who has developed her work mainly through images, both still and moving. Photographs, which she manipulates in various ways, and videos, in their different versions: video art, video performance, or video installation. She has also dipped her fingers in the production of objects and mainly of installations.

One of her main creative lines of research has been the woman’s body and the different approaches to the feminine. She has always contributed her own personal enquiries, opening paths for aesthetic experimentation, and rediscovering other forms and possibilities of feeling, looking and behaving, less mediatized and conditioned by the assigned stereotypes. Within this experimental search, she has developed a series of works, with which she has participated in diverse exhibitions, festivals, fairs and events of various kinds, such as: the video installation El sueño velado in the women’s group show 100% at the Museo de Arte Contemporáneo, Sevilla, in 1994; the video Sincronismos at the women’s video performance festival Érase una vez, del mínimal al cabaret: 70s - 90s, at the Museo Nacional Centro de Arte Reina Sofía, Madrid, in 1996; the piece that she contributed to the international project Women/Beyond Borders in Santa Barbara, USA, in 1995; the video piece Cuerpo at the Sandunga gallery in Granada, in 1996; her participation in Construcción de Mujeres for the Injuve2000, Madrid; or her participation in the international group show El bello género: convulsiones y permanencias actuales in the exhibition space of the Comunidad de Madrid, in 2002; Mirar el cielo mirar la tierra, visual poem about the women of Essaouira, Marrocco, 2003.

She has also expanded the field of her art works to other thematic areas such as: the forms of relations between men and women, the attractions and tensions that move around the strong feelings of love and desire, as well as the field of self-analysis and the self-affirmation that has allowed her to explore interestingly and subtly the concepts of individual and collective identity.

In addition, the artist uses different creative games to reach aesthetic as well as discoursive goals. One of these games focuses on lights and shadows, as visual elements taking centre stage in her work, and also as thematic and concept. Lights, shadows and penumbra, which she has reflected upon, multiply but deeply, from a metaphoric sense to a more explicit one, from the exterior space to the inner reclusiveness, from disquietude and  the search for peace and the encounter, from the already structured gaze to its detours in the search for one’s own light. A creative territory of exploration that has bore its fruits in a collection of powerful and suggestive pieces, such as those which were presented at the group show Iluminaciones at Casa de la Moneda of Sevilla’s town hall, in 1999. These works have at the same time allowed her to map a territory for experimentation, the results and observations of which have been incorporated into later works, such as those part of the exhibition that she is presenting at the moment under the title Cuando se oyen las moscas volar.

The artistic work of Carmen F. Sigler are also characterised for being charged of a great poetic force and a great aesthetic intensity. These aspects have intensified a personal imagery where reality is analysed and staged in a mixture with imagination, memory, dream, passion and desire, as we were able to witness in the set of works that made up her solo show Brulant d’amour sans abject at the exhibition spaces in Sevilla and Jerez of the Obra Cultural Caja San Fernando in 2001-2002. A reality transformed in this manner into something different, into a world in which pre-established definitions dissolve, and new territories are constructed, territories to tread on, that seduce us and captivate us with their vibrant and attractive images and carefully elaborated installations; at the same time that this reality envelops us into a sea of doubts, established as warning and alert against their establishment into comfortable territories, as the enigma and mystery that needs to be revealed, as the paths of a labyrinth, full of changes of rhythm, recessions and accelerations.


These are characteristics that have made up her previous creative works and that we can notice also in her most recent projects, like the one she is presenting at the moment at Palacio de los Condes de Gabia, named Cuando se oyen las moscas volar, with which she sets out into new enquiring paths.