Born 5 March 1966 in Vitoria-Gasteiz (Pais Vasco). Lives and works in Paris, Strasbourg and Auberive (France). Teaches at the ESAD in Strasbourg since 1999

Francisco Ruiz de Infante belongs to a generation of artists with a very distinct sensibility, marked by the encounter and confrontation between technology and other very simple materials. In his work he combines unselfconsciously technological devices with emergency DIY.

His constructions, almost always ephemeral, are the result of an experience “in situ” taken to its limit. These are created around, for, with and in the place that prompt them. In his idea of the exhibition space, the notion of “trajectory” or circuit predominates. And so, he elaborates landscapes, paths, tunnels, doors...: physical rituals of access to his “fragile architectures”, somewhere between a construction and a ruin.

Complex accelerators of the unconscious (routes and clue games)

The “routes to experimentation” that Ruiz de Infante proposes and the imbalance that they generate, are sometimes a “trap” crafted to induce the spectator to question her own perceptive reality. Ruiz de Infante reconstruct some of the modes of operation of memory when it is activated in the present: as powerful impulses full of information errors or as a flood of images that restart continuously. His audiovisual installations are complex accelerators of the unconscious.

References to the world of childhood are recurrent in all of his oeuvre. Childhood, or rather, the landscapes of childhood/adolescence/adulthood, have passed (and travel) through his different projects, gaining entrance to spaces in which the “strangeness of the everyday” becomes visible (sites of learning, party settings in the midst of being cleared up, playrooms without rules where nobody plays, threatening children’s huts, unbalanced construction game at scale one, clue games without an obvious logic, audiovisual spaces of an absurd violence...)

Limits between reality and fiction

His revision and analysis of these “education” stages in the life of human beings, present, thematically, some of the dangers of the “education-modelization” and its uneducation-development in adult society (a society that is highly “infantilizing” in the present context, in which the rumour of the media irresponsibly dictates the rhythm of collective thinking). When walking around his installations, it is possible to find direct allusions to the modes of constuction of the childhood period, lacking any hierarchical rules. In his work, the problematic of the scale, of the unfinished thing, of the hidden place, of extreme complexity in inefficient spaces, of inexact symmetry, of highly sophisticated chaos... transforms into something dangerous and disquieting.
Within this “acceleration” generated by the accumulation of sensory and conceptual elements in his works, Ruiz de Infante puts us face to face with the absurdity and awfulness of some behaviours that are, due to adult social roles, too automatic. My means of hindering and preventing the free movements of the viewer, he questions the notion of “the prohibited” in the “cero risk” society that some ideologies try to sell to us. This society often confuses “participation” and “manipulation”, “good education” and “lack of curiosity”. His devices show us (sometimes in an extremely physical fashion) that life is about risk and that we must always be on guard.

“... It is true that my view of the world of childhood is marked by its shady character. In this world, social laws have not yet been established and the meanings of the notion of “prohibited” are perceived as absurd.

Certainly, the child is often considered the perfect model of innocence... but, children are the seeds of adults who have not yet completely understood the social ecosystem in which they have to develop. Obviously, “the understanding” of the world of the “real” will take place gradually through the process of learning the rules that structure social relations in each context: scientific, cultural, moral and ethical education will make sure this happens. The assimilation of language and of the community codes will allow for the later acceptance of the codes, the subordination to these or an adult rebellion.

(As an artist and as a human being) I am fascinated by the freedom of the perception mechanisms of childhood, and the imprecise use of several rules that are just intuited. This generates interesting (and dangerous) social disfunctions, difficult to judge from a moral perspective. In many of my works, I try to decontextualise some of these mechanisms in order to better understand (and relativise) our adult freedom.”

Understanding and questioning “the prohibited”

With my last “devices” I look to provoke perceptive doubts in the viewer. I want to push him into a reflection that questions the foundation of the rules or norms (sometimes made explicit in the project by means of writing “instruction manuals”). In this manner, some simple questions are clearly presented: can I come in?, can I touch?, can we talk? can I sit down? ...
(...) in my most recent installations you enter the space as if you were entering a disquieting playroom, as a child exploring a space would enter, trying to scare himself. The game that I would like to invite the viewer to play can make her slip towards the prohibited game of adulthood: that game that consciously blends reality and fiction.

Construction and analysis of ecosystems (in which the notions of intruder, catastrophe, transformation and/or evolution are taken into account)

In my present work, I would like that physical and unconscious perceptions - intensified by the threat of some danger - could fight against the most intellectualised perception of the artistic act, without in so doing breaking the complex stability of perception. Thus my installations become fully meaningful only through their experience and direct contact: author, place, work, viewer, author...

Inside these “systems”, the visitors’ reactions make up an intense field of reflection through which to advance with each new proposition in unexpected ways. 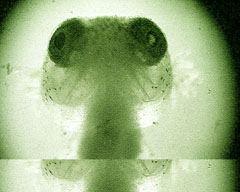