I have worked on video, multimedia, and installations for some time now, although I come from a more traditional context: painting, photography... And even though in the final pieces there is always some element that refers back to my earlier origins, something which occurs both consciously and unconsciously, this is clearly an earlier and past stage of my working trajectory. I must nevertheless point out that the transitions that have taken place between the different stages of my working life have neither been forced nor premeditated. The internal evolution of my work has directed this trajectory through the different media. A trajectory, on the other hand, whose progress is, curiously, quite coherent: painting, photography, video, interactive installations. My work has always been very closely related to the medium from which it emerges, either mixing one type of messages together, or turning to those which are diametrically opposed and which, in a certain way, reject each other.

At the level of the content of the pieces, there are a number of common processes: a first stage at which the material is searched and collected. This is a process which most of the time is adjusted to the specific medium being used at the moment: for a video production, the principal source for the compilation of material is television, for an interactive piece (CD Rom) the material is collected from internet web pages.

Naturally, after this first stage, there is a process of fractioning and repetition (loops, whereby ‘shock’ situations with the spectator are staged over and over again), followed by the creation of subtle and irrational atmospheres. 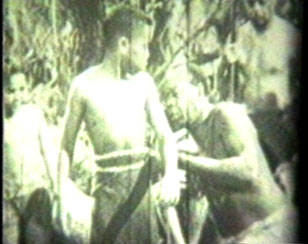