Since 1970 until short before his death, he shows his work in galleries, museums, screenings and festivals. His choice of media ranges from painting to installations, including photography, video art, performance and multimedia productions. He moves to Madrid in 1974, and it is then that he develops, together with the artist-poet Rosa Galindo, “Performance Art”. His first pieces as “Live Sculpture” in Madrid’s Plaza de Colón of 1977 are still remembered today as a spectacle of great impact. His first video creations are from 1979, when he begins to participate in some of the most important International Digital Art Festivals, and works in countries such as Sweden, Denmark, Greece, Holland, Italy, Germany, Austria, Switzerland, Canada, Australia, Yugoslavia, France, United States, Brazil, Portugal, Great Britain and Poland... At Kassel’s Documenta 8 in Germany and at the Amsterdam European Cultural Capital Festival, he was selected for his multimedia spectacle “Dedicado a la memoria” (Devoted to memory) as one of the seven most important groups in the world within the field of Media & Technology.

In 1981 he founded and directed the space Espacio “P” in Madrid, one of the few places that organised, produced and coordinated activities and exhibitions with Spanish and international artists working with new media for artistic expression.

He directed a training programme at Espacio “P”, taught courses and led seminars and research workshops on new media. Out of his programmes numerous performers, musicians, teachers, video artists and other artists have emerged. When Garhel returned to Tenerife in 1997, Espacio “P” ceased its activity.
In 1992 he became professor at the Facultad de Bellas Artes de la Universidad de Salamanca, teaching “Art and computer, new media for artistic creation” to 5th year students at the History of Art Department - Fine Arts.
Pedro Garhel was also a composer and performed his own music. He got involved in music very early on, and at 18 became singer in the legendary Orquesta Copacabana de la Orotava in Tenerife. In 1983 he founded with Rosa Galindo the music band Depósito Dental. Their compositions fall within what has been termed “new musics”. They composed for performances, spectacles, sound tracks, videos, tv ads... and published various

LPs as Depósito Dental and also in collaboration with other bands. They were awarded numerous prizes and special mentions at festivals both in Spain and outside.
All of Garhel’s work expanded and developed when he started using new media technology. However, his priority was not technology or information, nor virtuality or speed, but rather the human being as energy, as conscience, as creator and humane in communication. These concepts are implicit in his images, both in his installations and in this multimedia operas, they are an active and integral part of the developing process of his work.

His discourse proposes the fusion of visual arts and new musical and scenic concepts. His oeuvre examines a new creative side to the relationship between human beings, the spaces of memory, the architectural environment and the power of simulation of new technologies.

From 1997 onwards, he lives and works in his birthplace, where he founds the project FUNDACION [P], after 20 years of Espacio “P” in Madrid. He takes old and abandoned industrial buildings and turns them into decentralised spaces for art and creative activities. A good example of this process is EM[P]AQUETADO DEL ARTE, the first space organised for Arte del Presente (art of the present), a warehouse of 680m2 with 2000m2 of land surrounding it, where bananas used to be packed, located in the village San Juan de la Rambla.

Garhel was a multifaceted artist. He designed clothes, exhibited paintings and photography, made videos and performances, and composed and performed music.

This is a small instance of his prolific output. At the end of his artistic trajectory, Garhel organised “Grafica 2000” at EM[P]AQUETADO DEL ARTE, an exhibition of contemporary graphic expression, in which important artists working in new media participated. In 2002 he coordinated an exhibition of photography composition titled “Cantagoro”, and shortly before his death, he was collaborating with the Canarias’ Institute of Hispanic Studies producing a video forum and performance.

Puerto de la Cruz, his birthplace, has dedicated the video art prize “Pedro Garhel” to his memory, which is awarded annually during the week Arte Joven “Cruz Arte”. 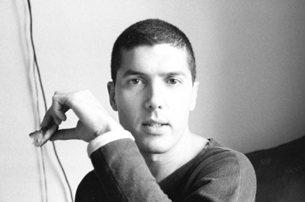